Orthodox People Worldwide Who Are Doing It 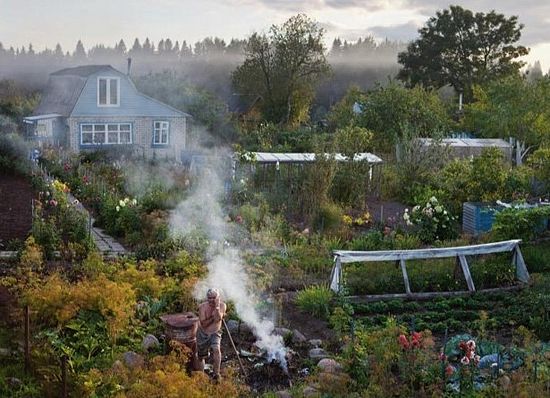 Would it surprise you to know that in Orthodox countries around the world, people are growing their own food, and doing so like crazy. They are producing massive amounts of food in small areas, which benefit themselves, their neighbors, and their economies on a broad scale.

Russians growing their own food.

Did you know that most food in Russia comes from backyard gardens?

According to The Bovine, Russia’s Private Garden Plot Act, which was signed into law back in 2003, entitles every Russian citizen to a private plot of land, free of charge, ranging in size from 2.2 acres to 6.8 acres. Each plot can be used for growing food, or for simply vacationing or relaxing, and the government has agreed not to tax this land. And the result of this effort has been phenomenal, as Russian families collectively grow practically all the food they need.

Back in 1999, before the law was enacted, it was estimated that 35 million small family plots throughout Russia, operated by 105 million people, or 71 percent of the Russian population, were producing

The average Russian citizen, in other words, is fully empowered under this model to grow his own food, and meet the needs of his family and local community.

In 2004, food produced from these family plots accounted for 51 percent of agricultural output. 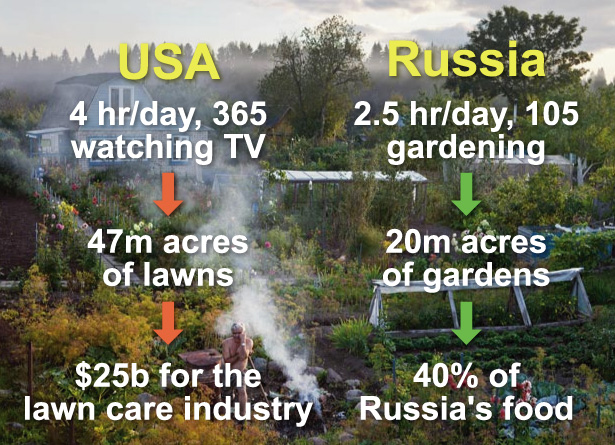 The information in this graphic is out of date, and gives the Russians credit for less than they have been producing for several years now.

Thanks to government policies there that actually encourage autonomous family farming, rather than cater to the monster of chemical and biotechnology companies like they do here in the States, the vast majority of Russians are able and willing to grow their own food on privately-owned family plots known as “dachas.”

Russian only has 110 days of growing season per year — so in the U.S., for example, gardeners’ output could be substantially greater. Today, however, the area taken up by lawns in the U.S. is more than double that of Russia’s gardens — and it produces only a commercial, multi-billion-dollar lawn care industry.

The backyard gardening model is so effective throughout Russia that total output represents more than half of the nation’s entire agricultural output, and this number only continues to increase as more and more Russians join the eco-village movement at their dachas. 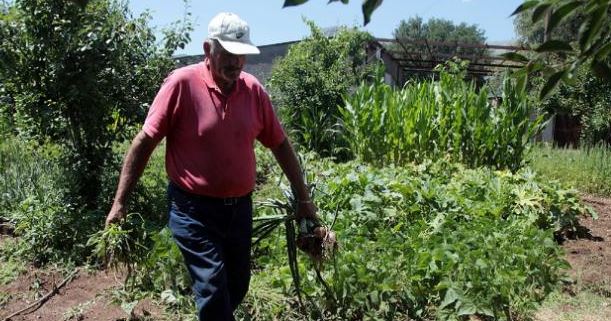 Greece, likewise, is returning to this kind of living in order to survive. In remote villages and farming areas of Greece, the concept of barter is not new, and is coming back strong. Farmers have long exchanged goods and services. Now the age-old practice has gained new vigor, reviving traditions from ancient Greece, amid a mounting and complex economic crisis.

Barter has been a part of everyday life for many Greeks for a long time. One of the world’s oldest trading nations, the Greeks along with the Phoenicians traded wine, olive oil, wheat and dye across the Aegean and the eastern Mediterranean for centuries. Previous to the economic catastrophe which Greece has been enduring, it was mostly on a family and individual level, but now is expanding due to be a more structured and organized phenomenon.

The growing practice continues to grow, and is most visible in rural areas and on islands where farmers are continuing to swap produce with each other.

In a crisis like this, churches come alive to help their people. How appropriate it is for Churches to become community centers for demonstration and education (gasp! The Church as a center for serving the local community and neighborhood?)

Anthony14 октября 2016, 20:00
St Paisios warned Greeks that they should if they could get themselves a plot of land to prepare for the forthcoming famine when international capital is withdrawn from the debt stricken country, and Turkey tries to attack her - the prelude to ww3.