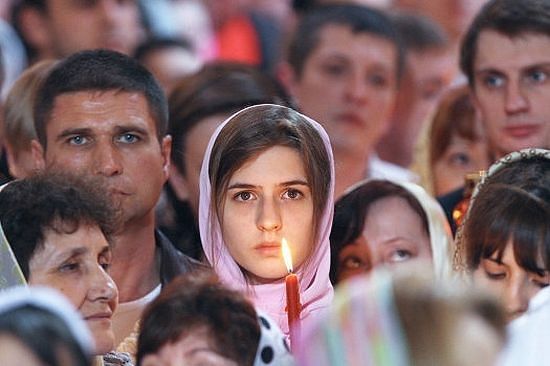 Majority of Russians believe disrespect to religious feelings is inacceptable and place them above freedom of expression, the Russian Public Opinion Research Center (VTsIOM) reports Thursday.

Thus, 67% of Russian residents believe that authors should not insult religious feelings in their works of art. This opinion is shared by representatives of the older generation (77% aged over 60), Orthodox believers (70%) and adherents of other religions (71%), rather than youth (53% aged from 18 to 24) and atheists (57%), the shows the poll held by VTsIOM on April 4-5 among 1600 people in 132 cities and towns in 46 regions, districts and republics of the Russian Federation.

On the contrary, 28% speak about supremacy of the freedom of expression and believe any limits inacceptable for figures of art and culture.

Three-Fourths of Russian Residents Believe that Russia Needs Orthodoxy The Sreda Sociological Service provides information on the opinion of Russian citizens about the necessity of Orthodoxy for the country:

Russia has experienced a spiritual resurrection

Russia has experienced a spiritual resurrection A quarter century after the Communist nightmare ended, it is the East where Christianity is rising again

More than 40% of Russian residents visited holy places at least once in their lives According to the respondents, going on pilgrimages, they are prompted, first of all, by faith and a desire to become closer to God.
Комментарии