The Skete of St. Anna on Mt. Athos

Today the Church celebrates the Dormition of Holy Righteous Anna, the Mother of Mary the Birth-giver of God. This is the day that St. Anna departed this world. The monks of Mt. Athos, the reigning Abbess of which is the Most Holy Theotokos, have always had a special veneration of St. Anna. The website of the Greek Orthodox Church of St. Anna in Roseville, California, where a relic of St. Anna is reverently kept, talks about the Skete of St. Anna on Mt. Athos: 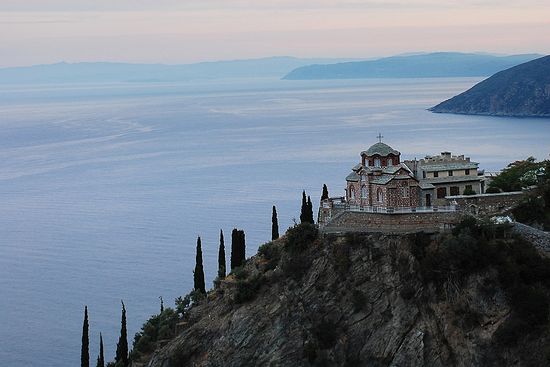 The Skete of St. Anna is the oldest and the largest Skete of Mount Athos, remaining in the spiritual care of the Great Lavra. It is located on the southwestern shore of the peninsula, situated some 500 meters up on the cliffs above the sea. The Skete is accessible either by boat, one hour from the port of Daphne, followed by a climb of over 2,000 steps from the sea floor (approximately one hour hike) or by foot, a six and a half hour hike from the aforementioned monastery. 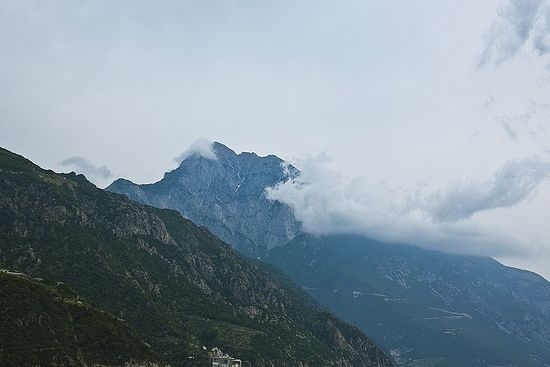 The main Church of the Skete, the Kyriakon of Saint Anna, was built in the middle of the seventeenth century. In the eighteenth century, the Church was expanded and fully ornamented with frescoes. The library which is attached to the Church contains some 100 manuscript codices, of which three are on parchment. The treasures of the Skete include the left foot of Saint Anna, a piece of the Holy Cross, the Holy Relics of at least seventy other saints, and a miracle working icon depicting Saint Anna and her daughter Mary. 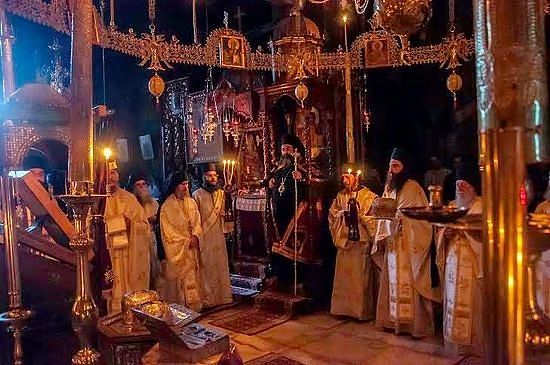 Vigil at the Skete of St. Anna.

Approximately 120 brothers are attached to one of the 50+ brotherhoods of the Skete of St. Anna, most with their own residence and chapel. These brothers maintain a discipline of work, prayer, self-reflection and study. During the summer months, they also offer hospitality to their over 100 pilgrims a day. The community is administered by a Dikaios, superintendent, who is elected from among the brothers to serve the term of one year. 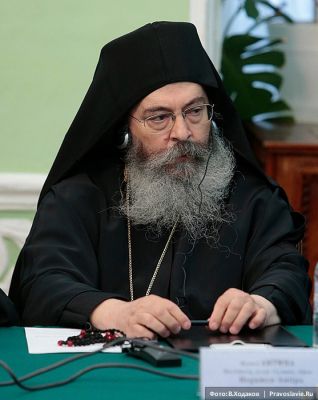 Abbot Antipa of the Skete of St. Anna, Mt. Athos, at a conference on monasticism in Moscow.
Situated some 50 meters above the central Church is the house (a kalyva) and chapel of the Theophileon Brotherhood. Founded by the priestmonk Theophileos in the 18th Century, the house was constructed over a small cave which the Brotherhood maintains was inhabited as early as 6th century. The cornerstone of the current building was set in 1745 while the house and chapel were renovated in 1986.

One of the elders of the Theophileon Brotherhood was the priestmonk Anthimos who reposed in 1996. Father Anthimos is considered to be one of the most recently identified “saints” of the Athonite peninsula. His relics are enshrined within their chapel, dedicated to the Feast of the Presentation of Mary to the Temple, commemorated on November 21. Three brothers currently reside in this kalyva - the V. Rev. Fr. Cherubim Apostolou, the V. Rev. Fr. Theophilos Kougioumtzidis, and the V. Rev. Fr. Anthimos Igglezis.

The religious writer Constantine Cavarnos has written about his experience of the All Night Vigil for the feast of the Dormition of St. Anna, the Skete’s patronal feast. Here is an excerpt from his book, The Holy Mountain (Institute For Byzantine and Modern Greek Studies (2nd Edition, 2001):

I went by motorboat to the arsanas (landing place) of the Skete of St. Anna, on the southern side of the Athos peninsula, in order to go up to the Skete and attend the feast in commemoration of the Dormition of Saint Anna, to whom this settlement of hermits is dedicated. This Skete is built on an abrupt slope a good distance from the sea. To reach its main church (known as the kyriakon, because the monks of the settlement gather in it on Sundays (Kyriake) for corporate worship), I had to walk uphill a for about half an hour. 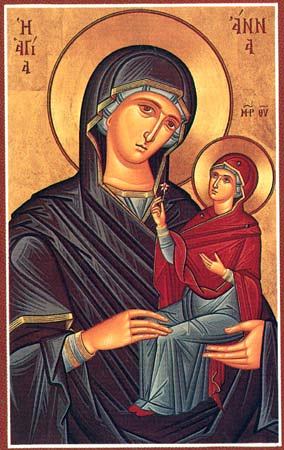 St. Anna, the Mother of the Theotokos.
The all-night vigil service, which constituted the heart of the celebration, was one of the most memorable experiences I have had on the Holy Mountain. It began at 8 o'clock in the evening of the feast and continued until 8:30 in the morning, when the Divine Liturgy, which followed the great vespers and matins, ended. This service had a spiritual magnificence that moved one profoundly, evoking contrition and a strong feeling of the presence of God. The chanting was done by two choirs, each consisting of three monks, all of them having beautiful voices and well-trained in the execution of Byzantine music. They stood in stalls along the east wall of the nave that is in line with the iconostasis, and faced west towards the congregation. At the beginning of the service the church was dark, illumination being provided only by the small sacred oil-lamps in front of the icons of the iconostasis. When the right choir began to chant Psalm 140 (Septuagint): 'Lord, I have cried unto Thee; hear me: attend to the voice of my supplication ...' one of the monks lit the candles of the great chandelier (under the dome) known as the 'corona,' those of the three other chandeliers in the nave, and those before the icons of the iconostasis, in front of the Beautiful Gate, and elsewhere. Thus the intensity of the illumination gradually increased until the whole nave became well illuminated. It was a warm, pulsating light, unlike the lifeless light provided by electricity. The sacred figures depicted on the panels and walls now became visible, increasing the feeling of holiness and contact with the divine. This feeling was further strengthened by the frequent censing with the famed Athonite frankincense. 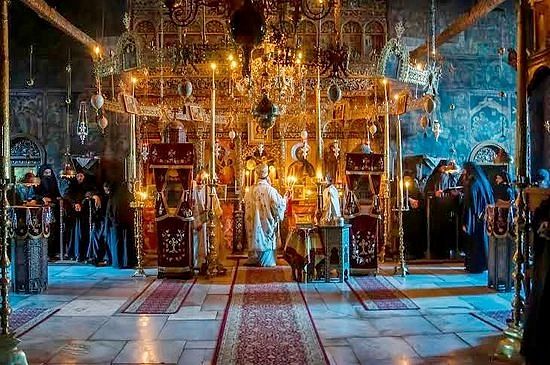 All Night Vigil Service for the feast of the Dormition of St. Anna in the Skete.

When the priest said in a loud intoned voice: 'With fear of God, with faith and with love draw near,' many of the monks and lay guests moved forward to the Beautiful Gate to partake of Divine Communion.

After the Liturgy, food was offered in the refectory to all who had attended the services. 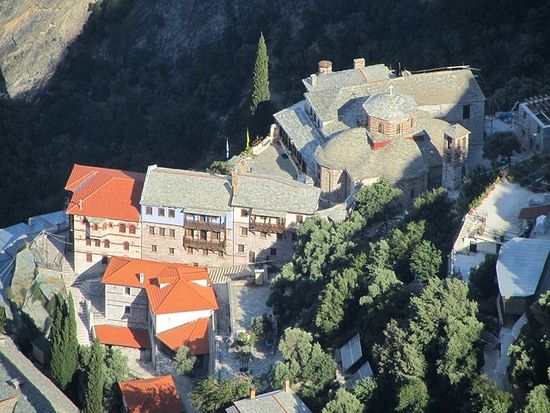 When the meal was over, one of the monks of the Skete, a retired Metropolitan named Anthimos, delivered a moving speech, in which he related the celebration to the goals of monasticism. The chief purpose of this event, he asserted, is to lift us to God and His saints, and to arouse our zeal to imitate Saints Anna and Joachim, to strive to acquire their virtues, to rid ourselves of 'passions' (negative emotions) and evil thoughts, to cleanse our soul of everything impure, so that we might attain happiness in the other, endless life, and so far as possible in the present life also. 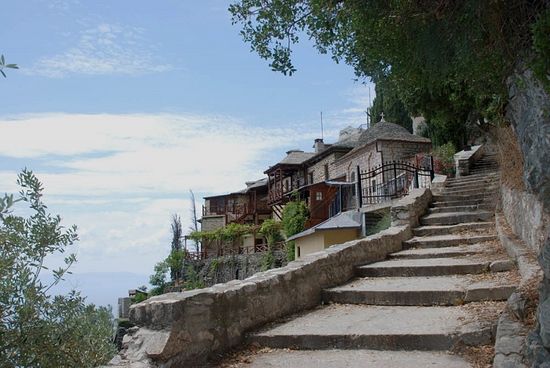 Pilgrims to Mt. Athos from all over the Orthodox world have for centuries visited the Skete of St. Anna and venerated her relics with great reverence and piety. 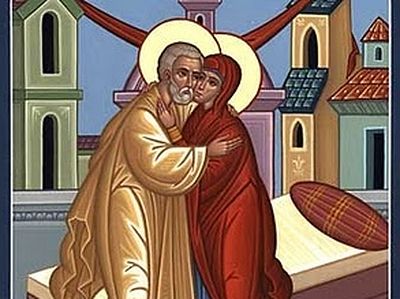 The Conception of the Holy Virgin Theotokos by Saint Anna Commemorated December 9/22 Sergei Bulgakov Struck by the speech of the High Priest, as though by the awesome verdict of the judgment of God Himself, the righteous man had no time even to withdraw from the altar, as a new heavier insult struck his hearing. One of the Israelites bringing his gifts, pushed him away, said, “Depart from here, did you not hear that you are unworthy to bring gifts to God together with us, because you have not left offspring for Israel?” With deep humility Joachim accepted this accusation as if it were from the mouth of the very God, and with deep sadness left the temple.

The Holy Relics of Saints Joachim and Anna in California church 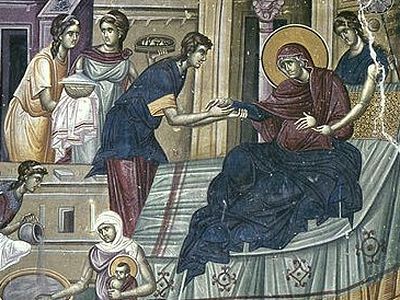 The Nativity of the Theotokos Icon