Great shrines of the Christian world – the right hand and a wonder-working icon of Great Martyr George the Victory-Bearer are visiting the Diocese of Belgorod, Russia, on May 22-24, reports Patriarchia.ru. These holy objects, brought to Russia in connection with the 70th anniversary of the Great Victory in the Second World War on the Holy Prince Vladimir charitable foundation’s initiative, are accompanied by representatives of the Xenophontos Monastery from Holy Mount Athos. 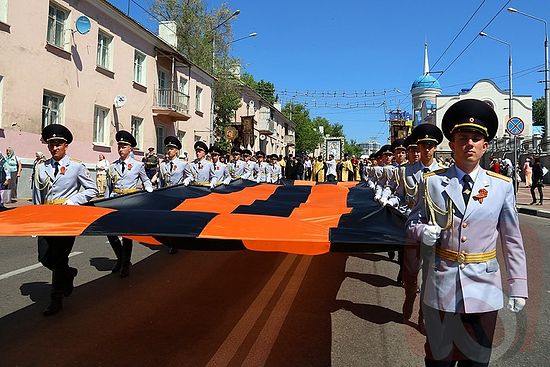 The miracle-working icon and hand of Great Martyr George (with which he carried out his military exploits) arrived to the Holy Transfiguration’s Cathedral of Belgorod on May 22. The procession that brought the relics to the church was headed by cadets of the Belgorod Institute of Law who carried a 20-meter-long (c. 65.6 feet) St. George’s ribbon – a symbol of the Great Victory. After them, accompanied by the guard of honor company and volunteers, the reliquary with the relics was carried by governor of the Belgorod region Evgeny Savchenko, chairman of the regional Duma Vasily Potryasayev and the city mayor Sergei Bozhenov. 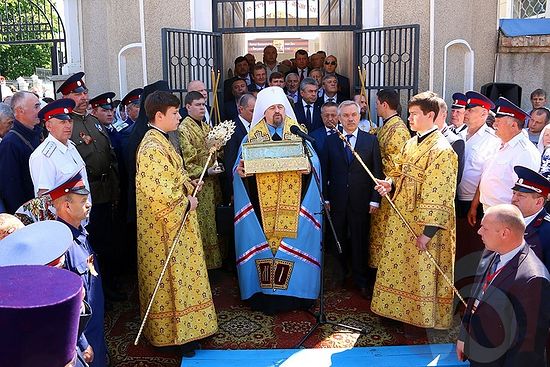 On May 23, the holy objects were to be delivered to the Church of Sts. Faith, Hope, Charity (Love) and their Mother Sophia where the Divine Liturgy was to be served, and on May 24 the relics were to arrive at the Church of the Nativity of Christ in Stary Oskol.

“We are very happy and excited that the relics of Great Martyr George, and we, the brethren of Xenophontos Monastery, are staying in this holy place,” said Hieromonk Joseph, deputy abbot of the Athonite Xenophontos Monastery. “We feel certain that all who come to the relics, look upon and address in their prayers to Holy Great Martyr George will surely receive needed help and support from him.” 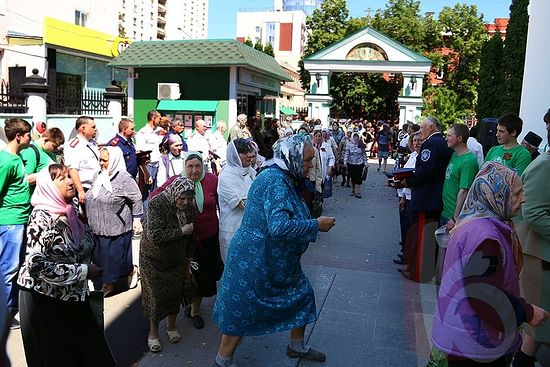 Belgorod has become the seventh regional center in the “itinerary” of the holy relics within Russia, after Volgograd, Stavropol, Elista, Yaroslavl, Rybinsk and Moscow. Since the relics have arrived in Russia already over 400,000 pilgrims have venerated them. The relics were to stay in the Belgorod region on May 22-24 and then they will be delivered to Krasnodar.

An Ineffable Fragrance Metropolitan Nikolaos of Mesogaia and Lavreotiki

An Ineffable Fragrance Metropolitan Nikolaos of Mesogaia and Lavreotiki It is impossible to describe how exquisite and noble are the podvizhniki![1] These people—although they bear the traces of harsh struggles, although their bodies are so withered and emaciated—have a fragrance and grace imprinted on their wondrous souls. 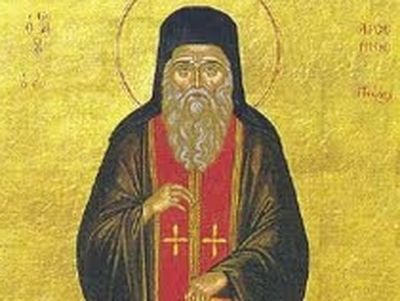 Saint George Appears to Saint Arsenios of Paros After years of counseling the sisters to stop their fighting and discord, he left the monastery one day in despair because they would not make peace. He decided to leave them to themselves, he would no longer be their spiritual father. 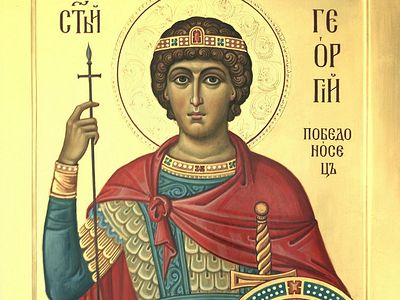 Homily on the feast of Great Martyr George. "Pray to your patron saint!" Fr. George Calciu There was a close connection between St. George and me. When I was in prison I always called upon him, and he helped me in many circumstances. From that time on and to this day I never cease to pray to him every day.
Комментарии