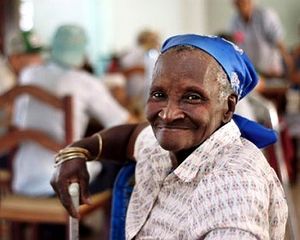 Nerri Milking is a sad black Cuban granny in an eternally clean yellow dress. She lives in the wire-enmeshed slums of Havana, in a tidy room on the ground floor, literally level with the asphalt. She has nothing, only two daughters (one died of cancer and the other committed suicide) and two sons (who emigrated to the U.S.). Nerri considers herself a very bad mother because she didn’t save the one, and didn’t stop the other. Every day at 9:00 in the morning, Nerri comes into the little bar located in the historical center of Havana and sits all day by the entrance to the WC, reading a book. Nerri Milking is a “toilet lady”. There are hundreds of them in Havana. They have a symbiotic relationship with the numerous eateries: we keep your washrooms clean and tidy; you pay us nothing for it, but you don’t object if the visitors pay. Voluntarily. Giving a little money to the toilet lady is a sign of nobility. All of Nerri Milking’s colleagues are decked out like queens, and by their very appearance they demonstrate to everyone that their business is not panhandling, but the last stronghold of aristocratism.

But what brought that to my mind? I myself don’t know.

Dilan Kottahachi is a sufficiently nourished man in the prime of life. He lives in the town of Vallaichenai, on the island of Sri Lanka. Only very recently the Tamils here were energetically killing the Singhalese, and the Singhalese, the Tamils. Now together they are all building a tourist paradise. Dilan works as a therapist in the little local hospital and pines for his homeland. His homeland is Sri Lanka, but he is nostalgic for Russia. In the 90s, Kottakachi studied for five years in the first medical institute of St. Petersburg. Now he is kicking himself for leaving, curses juicily, and is ready to kiss even the skinheads. He and practically the entire collective at work in the Vallaichenai hospital are “from Russia”. When you tell them about our bad roads they reply, “Well, you are a great country!” When you tell them about our injustice, they answer, “Well, you are a great country!” When you criticize the authoritarian government, they repeat like a mantra, “Well, you are a great country!”

So what does this Singhalese Dr. Doolittle have to do with anything?! Or that Cuban Januaria?! Just hold on a bit, just one more story and I think I myself might get it.

Stoyan Rakich. A lanky Serb, very quiet, speaks slowly, drives fast. Bosnia, Sarajevo. Stoyan fought, Stoyan killed, Stoyan sees his only justification in the fact that he has long since forgiven the Moslems who killed his friends and family. Here in general the ethnic hatred belongs to those who never spilled any blood—not their own, nor anyone else’s. In the neighboring Serbian and Moslem villages, which were only very recently in flames, all have been great friends for while now. But in the big cities the hot coals of resentment are still hissing like snakes.

“It’s all because of the peaceful civilians.”

“All wars begin because of peaceful civilians. The majority of them are irresponsible people; they don’t understand that bullets fly in both directions, and they have no catch lock against bloodshed. But the military comes in order to stop the war. A soldier always understands a soldier. In the field of battle it is very hard to hate the enemy—people only sing about that hatred in songs. That’s because those songs are also written by peaceful civilians.”

We are used to looking at good people as our co-strugglers in the battle against bad people. This really hinders us from perceiving them adequately—as something valuable in and of themselves, as the greatest treasure of this world, as a work of craftsmanship into which enormous labor was poured. If you are able to catch in your heart if only for a few seconds this pure perception of a good person, then you, like that Buratino, will open the forgotten door behind the painted hearth and find yourself in a world where there is, at the very least, one more dimension. You will learn a terrible secret. Well just a huge secret.

When I was little and stupid, I judged people by their words. Then I became a bit smarter and understood that you have to judge people not by their words but by their actions. This year I got completely turned around. This year I understood that you can’t judge people by their actions either. The very same people do things both very good and very bad—I know this not only about others, but also about myself. I can no longer ignore this knowledge, but what am I supposed to do with it? Does it mean that bad people do not exist at all?! And that you can’t judge people—ever?!

As for me personally—that statement alone, that there are no bad people, makes me squirm. The habit of hating at least someone keeps demanding yet another dose. But that cursed Buratino turns the key, the door inexorably opens, and there it is—that terrible secret, that huge secret. It turns out that the fourth dimension consists in the absence of a third. Man is something that just cannot be measured by man. Evil exists, goodness exists, but there are no bad people. Sin is a sickness. A person gets sick, a person gets well, but this is no excuse for hatred. You can’t hate a person all your life because today he has a head cold.

Fr. Basil Taguchi, Japan, the town of Ishinomaki, an Orthodox church in the midst of ruins left from the tsunami.

“When I was young, I often went to Tokyo to visit my friend who was a seminarian, and we would have a drink,” Fr. Basil began the long story of his life. “My heart in those days was dark, and life was not easy—I don’t even want to remember it… And I kept probing my friend: what is that faith you have, why are you so happy?”

Here we have a slight difficulty with the translation. A “dark heart” in Japanese does not mean “evil”, but something more like “tired,” or “tormented”. 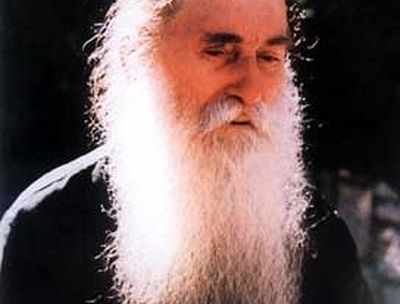 Don’t Judge Priests Archimandrite Arsenie (Papocioc) So, whether he is worthy or unworthy, the priest’s work depends on Grace, not on anything else. So don’t rush to judge him, because you’re making an enormous mistake. And here I must get back to a previous question – you should not judge anyone, not even some terrible murderer – let alone a priest! 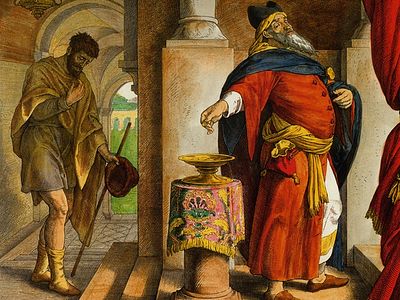 The Sixth Instruction. That We Should Not Judge Our Neighbor Abba Dorotheos

The Sixth Instruction. That We Should Not Judge Our Neighbor Abba Dorotheos So what is it we want from our neighbor? Why are we so concerned about the burden of others? We have plenty to be concerned about, brothers! Let each one of us attend to himself and his own sins. God alone has the authority to judge, to justify or to condemn, inasmuch as He knows the state of each one of us and our upbringing and our gifts, our constitution and abilities, and it is for him to judge each of these things according to the knowledge that He alone has. For God judges the affairs of a bishop in one way and those of a secular governor in another. 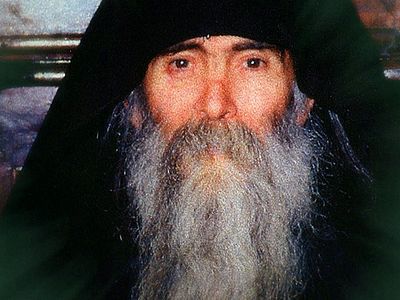 A Story about Judging Schemamonk Panaret of Philotheou And the Angel said to him, “Go to your confessor, whom you saw sinning, and do a prostration to him and ask him forgiveness for judging him. As regards his personal sins, God Himself tries his conscience and He Himself will hold him responsible. Thus, you only saw how he sins, but you cannot see either his repentance or how ardently he repented.”
Комментарии