Orthodox Christmas, a Message for Humanity

Today the Virgin gives birth to him who is above all being,
and the Earth offers a cave to him whom no one can approach.
Angels with shepherds give glory
and magi journey with a star,
for to us there has been born
a little Child, God before the ages.

Bethlehem has opened Eden, come, let us see;
We have found delight in secret, come, let us receive
the joys of Paradise within the cave. 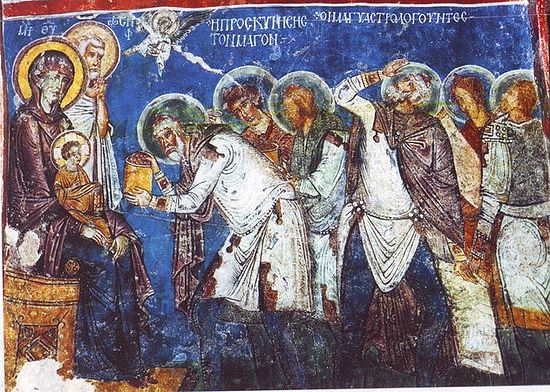 During these holy days, my father, being a Greek Orthodox priest, was always sure to remind us children about the true meaning of the birth of Jesus Christ as it is understood in the Greek Orthodox tradition. Apart from explaining the origins of the traditions that decorate this sacred instant of Christianity such as the trees, the ornaments and the special baked goods, he always took the time to depict the celebration in a most simple way so that we could understand its true meaning.

I remember sitting around the fireplace on Christmas Eve and listening to his soft narration about the symbolism surrounding the 25th of December. He would always begin by showing us an icon of Jesus in the manger among the animals and describe how the birth of the Savior fulfilled the prophecy of Isaiah by being born of a virgin and shedding his blood to atone for our sins.

"God became a man in order to save humanity from Adam's sin," he would say.

"He was given birth in a humble cave in Bethlehem with the animals providing warmth with their breath. The appearance of Christ on earth in such humility shows that Jesus arrived with the very humanistic message that God was not a punisher but, on the contrary, a compassionate creator."

We would listen attentively as he recounted how Jesus' birth was synonymous with humility, compassion, love, understanding and peace in the world and that he came here to baptize mankind in the virtues that had vanished after Adam. Perhaps the deepest spiritual meanings were beyond our comprehension but, in our eyes, my father's words, spoken as they were, brought to life the true magic of the event. To us, Dad was a saint, eternally emphasizing the ideals of Christianity, repeatedly espousing its forgiveness and compassion and telling us that we were truly blessed to be able to understand the meaning of this holy time.

Then, it was on to the fasting table. Mom would prepare lentil soup without oil which we would eat along with the "stavros," the holy bread in the shape of the cross that was baked using only strict fasting ingredients.

The following morning, dressed in our "Sunday best," it was off to church to partake in the Orthodox Christmas liturgy officiated by Dad celebrating the birth of Christ.

Listening to the "troparia" or words of the divine liturgy, special for the Day, I remember my father describing how Jesus rebirth denotes a message of forgiveness and recreation of mankind. For me, it was a tremendously joyous time, as I was thrilled to feel that I was experiencing this glorious event with soul and mind.

Lunchtime would follow, beginning with the Lord's prayer and the cutting up of Christ's bread, "the Christopsomo," a special feasting bread baked with the richest of goodies and the carving of the turkey roasted with all of Mom's love and expertise.

In contrast to the rampant consumerism of today, my memory often wanders to those wonderful times that remind me of the true meaning of Christmas . As time passes, I feel that the rest of the world should focus more on this message!

Another Way
Fr. Seraphim Holland
Here is what I want to share with you from my heart. When the wise men had finished worshipping the Lord Jesus, Being warned of God in a dream that they should not return to Herod, they departed into their own country another way (Mt. 2:12). This is very significant. Every time I read this, I am filled with great joy. There is another way, brothers and sisters.

An Orthodox Reflection on the 12 Days of Christmas
Gabe Martini 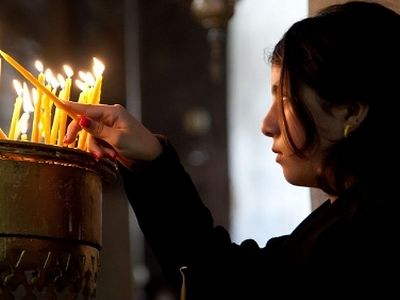 Christ is Born! Glorify Him!
Dr. Maria Khoury
It is within this darkness of all times and with the evil that has surrounded us that we need to be guided by the true Light of Christ. Since there is absolutely no peace in my world, I can only pray for inner peace that the newborn Christ brings to all.
Комментарии