The Attraction of the Russian North

An interview with Tatiana Yushmanova

Tatiana Yushmanova. In the north.
There has long been talk of the ruin of "Wooden Rus'." This theme inspires few today, when everyone considers that there are no longer any material or living witnesses to the intelligent yet simple structure of bygone villages. Nevertheless, the well-known Moscow artist, Tatiana Yushmanova, feels that if we acquaint ourselves with this very important part of Russian life we can no longer remain indifferent. For ten years now, she has travelled across Russia in order to know her country better, and she expresses her impressions in her art.

Tatiana Yushmanova.
She has managed to also draw her husband, priest Alexei Yakovlev of the Tikhvin Mother of God Church in Moscow's Alexeyevsky district, into the depths of the Russian land. Now Fr. Alexei's family and the parish community are working to restore these unique wooden churches, which are becoming more and more rare. But they can still be seen here and there, scattered across the boundless expanses of the Russian north.

A recent exhibit opened in the Ismailovo Gallery in Moscow, called "The Russian North," with over one hundred pictures by Tatiana Yushmanova, many of which can be viewed (for now, with Russian titles only) in our picture gallery, and the photo exhibition entitled, " Mutual Concern. Restoration of the Wooden Churches of the North," which shows the churches that are being restored in the north. Tatiana spoke with Pravoslavie.ru about her creative work, and the unique project for the conservation and restoration of wooden churches.

—Tatiana, there are many portraits in your exhibition. What sort of people do you choose for your subjects? 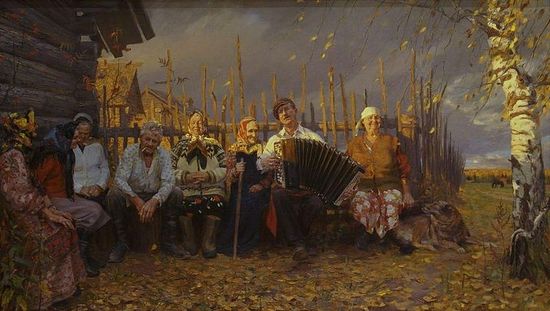 Tatiana Yushmanov. Village get-togethers. 2000 . Oil and canvas. 200х300 см
—I really like to paint simple, rural people. Children are also interesting subjects, but I especially like to work on portraits of elderly people. This really catches my attention. Their faces reflect a lifetime of experience and their thoughts about it; they have a particularly deep look in their eyes.

We sometimes meet people during our travels, and our acquaintance and friendship with them inspired me to paint a series of portraits. For example, there is the amazing Slepinin family, who live in a beautiful village on the shores of the White Sea. 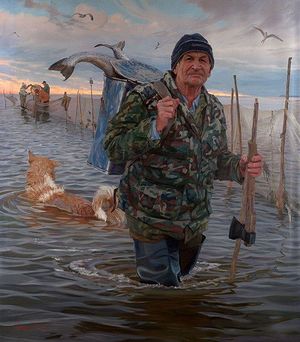 Tatiana Yushmanova. By the sea. A portrait of A. P. Slepinin.
They are already very old, and could not look on in indifference at how the churches of their native village were falling apart, and so they began gradually to restore the bell tower. That was when we met, and we were struck by their extraordinary example; after all, Sasha Slepinin, a seventy-five-year-old fisherman and carpenter, wasn't even baptized at the time.

His wife, Isabella Efimovna, a village schoolteacher, witnessed with her own eyes how the once over-filled village school, with up to fifty children to a class, was recently closed due to the lack of children. Both husband and wife are amazing people, and their friendship is a great gift for us. I painted several portraits of Uncle Sasha, and one of Isabella Efimovna. Now I am working on a large portrait of Isabella Efimovna as she stands by the Russian brick stove, baking traditional northern pies. She is an unsurpassed master at this. 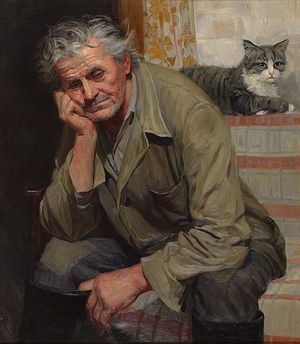 Tatiana Yushmanova. Portrait of Uncle Sasha Korolev.1999. Oil and canvas. 80х70 см
We fell in love with the village where this beautiful family lives, and began to help them as much as we could with their work to save the bell tower and unique St. Nicholas Church, built in 1636. In one year, we were able to change the doors in the church, replace windows, and restore the bell tower. Then a benefactor came along who provided the funds needed to professionally restore two miraculously surviving cupolas, and replace three insufficient ones. In the summer of 2010, the St. Nicholas Church truly became the adornment of the village. Parallel with the efforts of the local villagers, we were able to completely restore a nearly ruined church in the cemetery. Then, the idea was born to help other churches. Archpriest Dimitry Smirnov, the head of the Moscow Patriarchate department for cooperation with the armed forces and my husband's superior, contacted the ruling bishops of the northern dioceses, and blessed us to do emergency repairs in all the wooden churches of the north. Thus began the project, "Mutual Concern." Restoring the wooden churches of the north." And in the village where it all started, people are coming together around the restored church—a parish community has even formed. There is Sunday school during the summer, visited by the local children and children of the dacha owners. Adults also come. The classes are taught by Fr. Alexei, me, and professional teachers who spend their summer vacations there.

—Why have you chosen the Russian north as the source of your inspiration? After all, there are many other no less interesting places for an artist in Russia.

—I am a native Muscovite, and the first time I ever saw a village was at age ten, when my parents bought a house in a tiny village in northern Yaroslavl Province. I was often there, at all different times of the year, and I became very close to the local old people; I would try to help them with their work around the house. I came to love the rural life, did many drawings and paintings. When I entered the Russian academy of painting, sculpture, and architecture, I visited the north for the first time. I was always drawn to it after that, and… it felt like home. It was a trip to Archangelsk Province. I was captivated by everything there: the stunning nature, the unusually open, hospitable people, old villages with tower-like houses, and, of course, the surpassing beauty of the wooden churches and chapels—the pearls and pride of Russia. Later there were very many trips to the north, including Karelia, regions beyond the Arctic Circle, and Siberia. I travelled along the shores of my beloved White Sea, and many northern rivers. 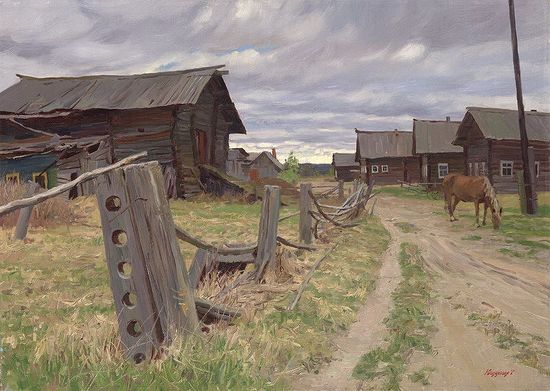 Tatiana Yushmanova. New grass. 2006. Oil and canvas. 50х70 см
I have travelled during different times of the year, and have always acutely and joyously felt that I was home. I feel very good in the north, I get my inspiration there, and it has become the main theme of my creativity. I have been to the south, and to many foreign countries, but I have never seen a better land for me. In the Russian north, there is an amazing union of past and present, modernity and history, man and nature. There is such a light and tender harmony of water, air, the sunrise-sunset skies of the white nights, and the stark power of uninhabited space and snowy winters. But the main thing about the north for a Russian is that it is the most Russian place, as the scholar, Dimitry Sergeyevich Likhachev remarked. The north played an outstanding role in Russian culture. It never knew the Mongol Yoke or serfdom, and this can be seen in the courageous, dignified, and simple character of the northern people. D. S. Likhachev directed his attention to the fact that the north saved Russia during wars, protected Russian antiquity for us, ancient customs, Russian wooden architecture, Russian musical and literary culture, and Russian work traditions. Of course that is true! Furthermore, there is a healing moral strength in the Russian north, and we should cherish it, preserve it, and not allow the depopulation of the villages and the ruination of churches there. 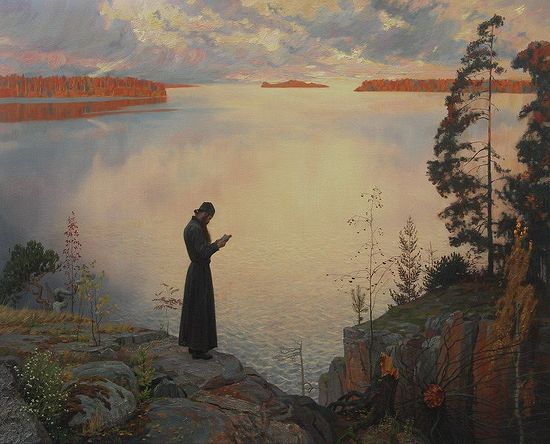 Tatiana Yushmanova. Quiet. 2005. Oil and canvas. 100х120 см
And how many wonderful monasteries there are in the north! I was baptized in Valaam when I was eighteen, and did many paintings there. I was struck by the subtle harmony of the unique nature there, the znameny chant, and the marvelous monastery services. My strongest impressions in Solovki were connected with the seaside fishermen, their work and everyday life. There, I fell in love forever with the White Sea and the white nights, and I did much work during every visit to the archipelago. Also very dear to me is the Monastery of St. Artemy of Verkola at Pinega. I am very fortunate that my husband, Fr. Alexei, shares my love for the Russian north. Thus, I have many associations with the north. Three years ago, we bought an old house in the seaside village where, with God's help, the St. Nicholas Church was brought back to life, and batiushka and I are now introducing our little son to the north. 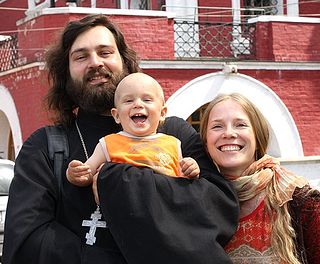 —The family of a priest is always an example for parishioners. How do you manage to combine being both a priest's wife and an artist?

—I manage precisely because my husband is a priest. Orthodox people, especially priests, relate very responsibly to talent. If God has given someone a talent, a gift, it must definitely be developed and not buried. So, Fr. Alexei is my main helper and inspirer in everything. I am very grateful to him for his support. I never thought that I would be a priest's wife, and when we first met, he knew that I am an artist and could not abandon painting. Helping me to disperse the accepted stereotype of a priest's wife as either a homemaker or a choir director, he introduced me to priest's wives with a wide range of professions. Of course, with the birth of our son, there was considerably less time for my work; but that only made me value the time more and use it more fruitfully.

...
Предыдущий Следующий
Комментарии
Войдите через FaceBook ВКонтакте Яндекс Mail.Ru Google или введите свои данные:
louis hemmings 2 мая 2013, 02:00
lovely paintings. I was in SPb in 2008 for a few weeks helping create a Christian your centre project. on our last day we did a brief tour of SPb. near the Church of the Spilt Blood I saw an old woman selling home made hats....http://cowbird.com/story/7042/Five_Old_Fashioned_Home_Made_Hats/ perhaps you could illustrate my poem? all the best from the land of saints & scholars
Orthodox Mom 9 декабря 2012, 22:00
Check out her website http://www.yushmanova.com/en
william robertson 2 июня 2011, 05:00
how would i buy her art.
revf. fr. francis cris holanda salinas21 февраля 2011, 11:00
its very wonderful and sincere sharing good luck for the good work in the ministry